Recent mobile device releases have raised the bar in terms of display pixel density. The iPhone4 326PPI ‘Retina display’ is getting a lot of (deserved) attention in this respect.

This trend and the concurrent surge in tablet popularity means we're now designing for an extremely wide range of display specifications. High pixel density tablets can't be far away… (UPDATE. The new iPad did this as of March 2012).

With the advent of high pixel density displays the pixel itself is now a relative unit.

According to the CSS 2.1 Specification:

Pixel units are relative to the resolution of the viewing device, i.e., most often a computer display. If the pixel density of the output device is very different from that of a typical computer display, the user agent should rescale pixel values.

So, a ‘CSS pixel’ indicates one point on the virtual pixel grid to which our CSS design aligns. This either directly matches the actual device pixel grid on which our content is rendered or it is intelligently scaled.

This has led to the definition of a ‘Density-independent pixel (dip)’. (Android Developers)

A virtual pixel unit that applications can use in defining their UI, to express layout dimensions or position in a density-independent way.

iPhone4 was not the first to employ virtual pixels although other implementations often had less convenient scaling factors. 1 virtual pixel could equal 1.5 physical pixels and so on.

A detailed summary of the ‘Pixel is not a pixel’ situation is available on quirksmode.

Like it or not, fixed layouts now exhibit fluid behaviour on displays that employ density-independent pixels.

The fixed vs. fluid layout argument has been rendered irrelevant.

Fixed layouts will continue to work acceptably on iPhone and other mobile web-enabled devices. The touch interaction method that iOS, Android etc. employ is a great solution. The virtual pixel scaling algorithm does a great job, the end result being the quality that iPhone4 exemplifies.

However, when targeting mobile devices via CSS Media Queries the virtual pixel situation rapidly gets confusing. Fixed layouts were popular because exact ‘pixel perfect’ control was simple, now it's simply not.

What happens if future high pixel density displays require 2.5x scaling or even pixel tripling? How much relative pixel math with awkward ratios can you endure?

This technique enables all the freedom in the world to tweak for specific devices.

You'd be safe in the knowledge that the fallback fluid layout would be presentable since it would scale smoothly across multiple devices due to it's independence from pixel ratio.

Enabling it yields improved support for kerning pairs and ligatures. They look great on iPhone4!

It degrades gracefully to standard text rendering if not supported. Demo.

Combined with carefully chosen fonts, CSS text shadowing and the improved text-rendering declaration, we have some great options for fantastic high resolution typography.

The device-pixel-ratio Media Query can be used to target style for high pixel density displays.

Note that for the moment vendor prefixes are required.

Opera requires the device pixel ratio as a fraction and the -moz ‘prefix’ does not operate as one would expect.

Media Queries continue to provide a strong starting point for all CSS based device-pixel-ratio and device-width optimisation decisions.

Device pixel ratio can also be queried in JavaScript.

The most prominent trick to come out of pixel ratio Media Queries is high-resolution background image substitution.

For example, a website header could vary quality in line with the pixel density of the display it is rendered on.

This maintains the correct relative size on screen, but results in noticeably improved image definition on screens that support it.

Assuming a desired 100 by 100px (virtual pixels!) image size, the saved image resolutions would be as follows,

There is a problem with this. The device pixel ratio is not always a neat ‘2’ as with the iPhone4. How many images are you willing to produce? Already, just with 1x, 1.5x and 2x, that's three images! This won't get any easier.

The solution? Create one large (2x resolution) image and then scale down by 50% (in-browser) via CSS for all pixel density displays.

Devices without a perfect ‘2’ pixel ratio will still produce better results than a low-resolution image, for far less work.

Browsers (including mobile browsers) have great scaling mechanisms nowadays so the resulting image quality will be good across all devices.

Yes, this does mean greater bandwidth required. Looks vs. performance would require consideration.

Mobile stylesheets shouldn't be using many images anyway, so perhaps this is just a proof-of-concept technique with little real world significance.

Remember that a lot of people on iPhone4s are also now paying for their data!

If pixel ratios exceed 2 in future then consider SVG or a similar technology. Besides, surely 2x is near the maximum? 326ppi is the ‘Retina Display’ after all :-p

‘That's because the Retina display's pixel density is so high, your eye is unable to distinguish individual pixels.’ - Apple Inc.

We've taken care of images specified with CSS, but what about standard <img> tags?

If you're happy serving up high-resolution images, then we can use a similar scaling technique. This could be accomplished with the following JavaScript snippet (using jQuery for brevity).

All document <img> elements are automatically resized on high pixel density screens. Normal 1:1 screens can either leave the image unscaled, or force the scale of all images via a separate function (included in the source). Your call.

There is a better method. Tag images that are to be high-resolution with a class.

Then target <img> elements tagged with this class with the JavaScript scaling technique.

Now for a demonstration. One image is class tagged as 'highRes'. Note, on 1:1 pixel ratio displays, these images will be the same size. 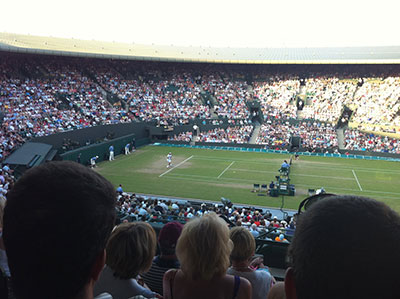 For the full details of how this works, check out the source code.

If you decide to make all your images high resolution and scale by 50% you could have a lot of wasted bandwidth for viewers on 1:1 pixel ratio displays. You do have some flashy waste reducing options, depending mainly on how much work you are prepared to put in.

CSS targeted at mobile devices often scales images anyway. This usually means a single column with images occupying 100% of the device width. If this is your mobile design strategy, stick with it. Just be aware that you can now get higher image quality if required.

There have been suggestions concerning automatic fetching of high resolution images. These techniques do have potential, but until the performance implications (request numbers, 404s etc.) are taken care of then this method is not feasible.

If this could somehow be done on the server side, then it could be very popular. It would also have to include automatic image scaling, so that web designers aren't manually creating many versions of the same image.

Use the CSS tools at your disposal. They're resolution independent and bandwidth friendly!

You don't need any of the aforementioned optimisations, they're optional!

From device pixel ratios and scaling to the zoom interaction method popularised by the iPhone, tweaks for high pixel density displays are simply a nice touch on what is becoming a very solid mobile web browsing experience.

Comments, suggestions or feedback via Optic Swerve on Twitter please.

Getting the Viewport Scale.
Read more.

All source code is provided for free.

A standard disclaimer of warranty and limitation of liability applies.